The Heart and Soul Remains the Same

While times have changed, the core values and beliefs at the heart of Thunderbird remain the same. Our leadership lives by a deep sense of history and purpose as we grow boys and girls to confident and capable strong young men and women.

Georgia’s experience shows that the best course for a p-16 agenda is to focus only on the points of intersection in essaydragon.com the work of these agencies.

This Home has Strong Traditions

In 1969 Speedy and Honey’s daughter and son-in-law, Carol & Allen “Moe” Sigoloff, helped establish Camp Thunderbird for Girls. The following year, they became the Directors of both camps and carried on the Thunderbird traditions for the next 40 years. During their four decades in camping, Carol and Moe helped advance the camping movement, playing active roles in the American Camp Association at local, regional and national levels. Central to their work was the idea that every child, no matter their background, should have the opportunity to benefit from a camp experience.

And today the legacy continues with the third generation of family owners/directors, Shari Sigoloff and her husband Michael Rawitscher. Shari grew up at Thunderbird as a camper, counselor and a member of leadership, developing a keen understanding of community, friendship, positive role-modeling, and a love for the outdoors. She pursued a career as a speech-language pathologist but soon discovered that her true passion was camping. In 1996, Shari returned to Thunderbird full-time as the Co-Director of Camp Thunderbird for Girls. Shari is the past president of the Camp Owners and Directors Association and is a 10+ year member of American Camp Association National Insurance Committee.

Michael also grew up with a passion for the outdoors and an understanding of how his own camp experiences were formative to his development. After teaching high school math for 12 years, he joined Thunderbird full-time in the spring of 2010. As co-director and finance manager, Michael devotes his considerable talents and energy to ensuring that every camper has an incomparable, life-enriching experience at Thunderbird.

When not calling Thunderbird home Shari and Michael live in St. Louis, Missouri, with their two children, Daniel and Paige.

Boys Camp Director, Roger “Brick” Bristowe, first arrived on the shores of Lake Plantagenet in 1993, coming to Camp Thunderbird from Bournemouth, England. He began his Thunderbird career as a counselor and went on to lead the Pacific Northwest, Junior Leader, and Counselor-In-Training programs. In 2000, Roger joined the year-round Thunderbird staff as the Boys Camp Associate Director, working alongside then Director, Allen “Moe” Sigoloff. For nearly two decades, Roger returned home to Thunderbird each summer, with only a brief break from year-round work to start a family. During this time away from Thunderbird, he developed a not-for-profit adventure program that provides inner-city children the opportunity to experience the outdoors. In May of 2008, Moe retired and named Roger as the new Director of Camp Thunderbird for Boys.

Roger’s home away from Thunderbird is in Ridgefield, Washington, with his wife, Juli, a high school science teacher and former Thunderbird counselor and trip leader (yep, they met at camp). Roger and Juli have two daughters, Haley and Jessi who call Thunderbird home each summer.

The Right Kind of Idol to Look Up To; Superheroes in Counselor Clothing

Counselors are like rock stars and superheroes to our campers so we have to choose wisely. At Thunderbird we nurture leadership skills in every staff member from the kitchen to the cabins because we’re all setting examples for our campers. As a result, we have a dedicated, enthusiastic, and motivated team of leaders who act as powerful role models on a daily basis. While it’s easy to find staff for a camp, it takes an entirely different approach to find people who will inspire kids and who genuinely love what they do as much as we do. We’re not searching for workers, but for mentors, teachers, facilitators, nurturers, big brothers and sisters, and people who make Thunderbird home for our campers. At least a third of our staff have grown up at Thunderbird; these staff are integral to the continuation of tradition and spirit of camp.

When hiring, all staff have background checks, along with a combination of written and phone references and extensive interviews. Our staff come from the United States, England, Ireland, Scotland, Mexico, Australia, New Zealand, South Africa, Hungary, Poland, and more.

We are proud of our staff return rates. Annually, about a third of our staff team is made up of counselors who have grown up at Thunderbird. We strive to bring back around 50%+ of our staff team to keep tradition and the true sense of community alive. New staff compliment this established team by bringing fresh ideas and perspectives.

Once hired, all staff attend a 9 day staff training program with continued training and feedback throughout the summer. Our commitment to physical safety and well-being is best identified through the number of training courses we offer onsite each season. Staff are handpicked to attend: Red Cross Lifeguard (two classes offered), First Aid and CPR, as well as, Wilderness Medical Institute/NOLS Wilderness First Aid, Wilderness First Responder, and WFR-Recertification. We have around 30 counselors who are certified lifeguards at each camp and the majority of our staff that work with the children directly are First Aid/CPR trained. All wilderness programming staff have Wilderness First Aid or Responder Certifications. 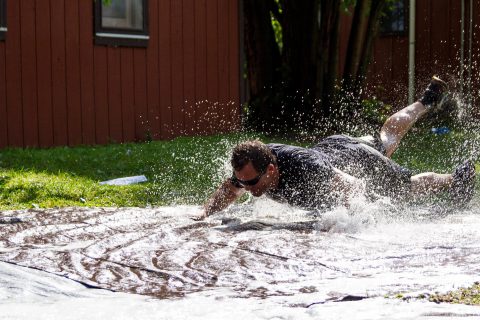 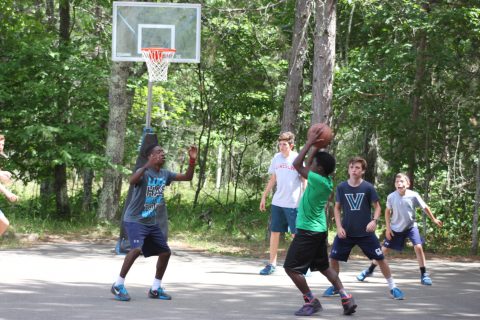 Are you ready to choose your adventure?